Diagnostic ultrasound, also called sonography or diagnostic medical sonography, is an imaging technique that uses high-frequency sound waves to produce images of structures inside your body. The images can provide valuable information for diagnosing and treating a variety of diseases and conditions. 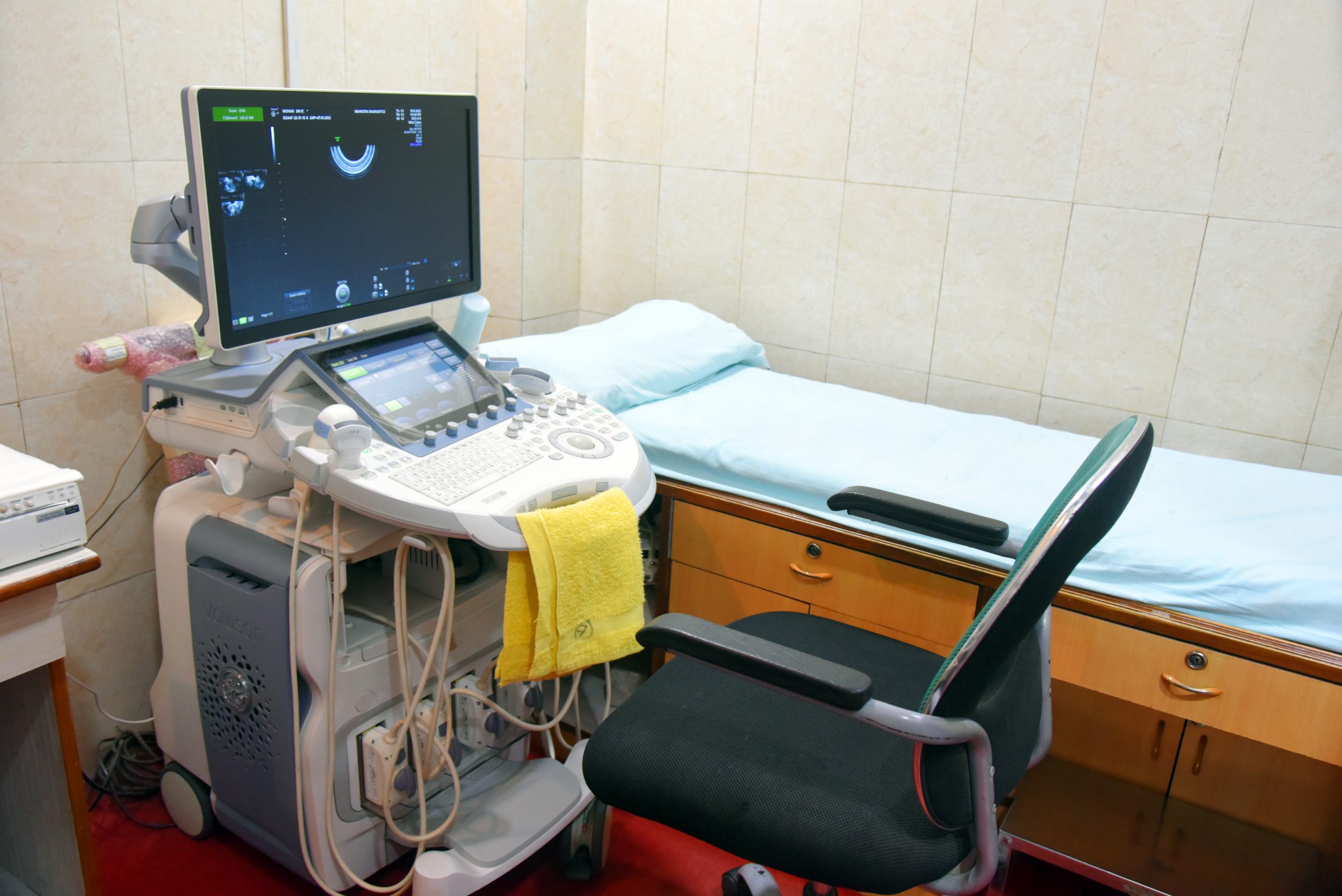 Book An Appointment
Get a Call From Us
How do I prepare for Ultrasound?
What happens during Ultrasound Procedure?

For most ultrasound exams, you will lie face-up on an exam table that can be tilted or moved. The doctor specifically trained to supervise and interpret radiology exams called radiologist or sonographer will position you on the exam table. A water-based gel applied onto the area of the body under examination. Then places a device, called a transducer on the body. The gel eliminates air pockets between the transducer and the skin that can block the sound waves from passing into your body. The device sends high-frequency sound waves that are not audible to human ears called ultrasound into your body. The ultrasound generated by the device bounces off bones and tissues like an echo and is recorded with a microphone and turned into images on a monitor. The radiologist moves the device back and forth over the area until it captures the desired images.

Denser substances like bones give off a better echo than the softer tissue that the body is made up of, and by comparing the echo, an image is generated in a computer and displayed in real time.

Diagnostic ultrasound may be used to:

Upper Abdomen ultrasound is used to check the organs in the upper abdominal cavity. These organs include the Liver, gallbladder, spleen, kidneys and the surrounding areas

Lower abdominal ultrasounds are used to check the organs such as the urinary bladder, pelvis, prostate and uterus.

Ovulation can best be understood through follicular monitoring. It is an ultrasound scan done inside the vagina to study the ovaries, uterus and uterus lining. It is conducted at regular intervals and documents the pathway to ovulation. The scan determines the size of any active follicles in the ovaries with an egg.

Sonomammography (Ultrasound of Breast) Sonomammography or ultrasound of the breast is a non-invasive procedure performed to check the health of breasts and the blood flow to areas inside it. It is an imaging technique that is used to examine and screen for cancer or/and other breast abnormalities. Very high resolution is required in mammography to allow discrimination of fine microcalcifications and morphological features of soft tissue structures such as masses.

High-resolution ultrasound is an ideal initial imaging investigation for most neck lumps. Most lesions in the neck are site-specific, once a lesion has been located, specific ultrasound features can be used to establish the diagnosis.

High resolution ultrasound uses waves to measure and produce detailed images of your eye and eye orbit (the socket in your skull that holds your eye). This test provides a much more detailed view of the inside of your eye than a routine eye exam. It is used to detect foreign substances, detachment of the retina, glaucoma, cataract, lens implant etc.

Medical doctors use to examine the inside of a person’s pelvic region with TVS. The TVS ultrasound to examine the internal organs such as vagina, cervix, uterus, fallopian tubes, ovaries, and urinary bladder. It is also useful to check for ovarian cysts or tumours, fibroids and polyps.

Fetal Well Being ultrasound is a test used during pregnancy. It creates an image of the baby in the mother’s womb. It’s a safe way to check the health of an unborn baby. During a FWB ultrasound, the baby’s heart, head, and spine along with other parts of the baby are evaluated.

This is a detailed scan which, in our country, may be done at 18-20 weeks. During the anomaly scan each part of the fetal body is examined and special attention is given to examining the brain, spine, face, heart, stomach, bowel, kidneys and limbs. Several other parameters such as the position of the placenta, amount of amniotic fluid, fetal growth, etc are noted. This scan enables parents to become aware of any abnormalities in the baby so that they may do further counselling and take informed decisions.

4D ultrasounds are performed from 18-38 weeks, though the optimum time is between 24-34 weeks. With 4D scanning the fetus can now be seen to yawn, cry, swallow, blink and perform intricate finger movements. These activities can be seen in mid pregnancy although they become more common as pregnancy advances. Ultimately, the experience that you will share will be an incredible one that you will carry with you for a lifetime Same Ultrasound equipment is used for Doppler study. But Doppler scan can detect the flow of blood in blood vessels, estimate the speed of the blood flow, determine its direction, detect blood clots, etc. Most ultrasound equipment these days has an inbuilt Doppler feature and both the scans can be done together. Color Doppler uses a computer to convert the Doppler measurements into an array of colors. This color visualization is combined with a standard ultrasound picture of a blood vessel to show the speed and direction of blood flow through the vessel. Doppler scans are used during the third trimester on women who have high-risk pregnancies.

It is basically hormonal imbalance in females associated with androgen excess.

Prevalence = 8-13% of women of reproductive age.

Transvaginal ultrasound is one of the main tools a healthcare provider has when it comes to diagnosing polycystic ovarian syndrome.

Find Us On Map